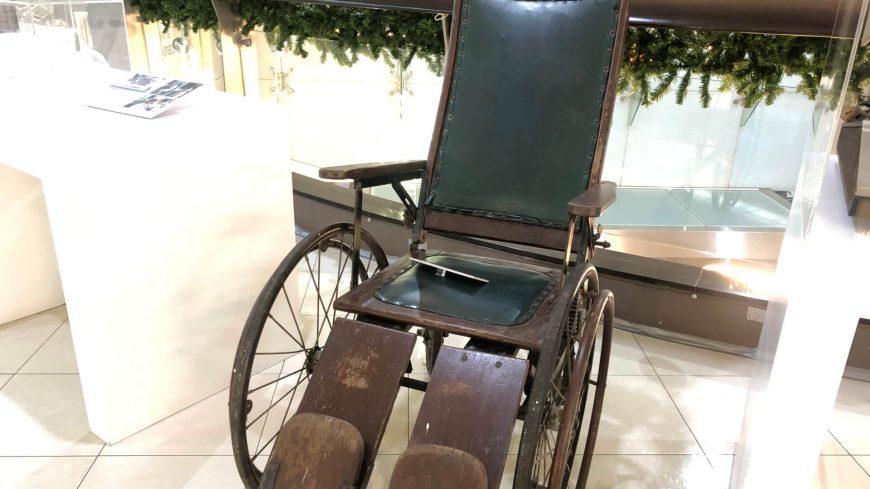 The History of the Electric Wheelchair

Nowadays, innovation, captured in electric wheelchair ranges, has helped modern society remain mobile, especially those affected by challenged mobility including disabilities. What’s now available on the market represents a long and rich history of change, where electric wheelchairs have transformed from a basic mobility device to become an advanced method for getting around conveniently and comfortably.

Here’s the evolution of the electric wheelchair through the ages, from its initial invention to the first time a motorised wheelchair was introduced to the market. The experts at LITH TECH have the key dates that every wheelchair user will find interesting.

The Electric Wheelchair – A Short History

The earliest mention of the wheelchair is hard to pinpoint, but many historians have discovered inscriptions and other evidence suggesting that mobility devices were around in ancient Greece and China (sixth century AD).

In 1595, when he was challenged by severe gout (which made walking less practical), an inventor for King Philip of Spain (who reigned between 1529-98) created an elaborate chair which was designed to ease mobility.

1783 – The Electric Wheelchair Was Invented

The first wheelchair that was invented was the Bath wheelchair in 1783. This was made by an investor called John Dawson, and it outsold all other wheelchairs throughout the first part of 19th century. However, the wheelchair was supposedly very uncomfortable and in the later years of the 19th century many improvements had to be made to the chair. The first patent for the wheelchair came about in 1869.

In 1869, as told by historians, a patent was submitted for wheelchair casters and a rear push feature. From this rough depiction of a wheelchair, this is largely considered the earliest memory of this kind of model being built.

The End of the 19th Century

In the late 18th century, between 1867 and 1875, investors introduced rubber wheels and included them in the design of the wheelchair. It was thought that rubber wheels looked like those on a bicycle from the same time. Importantly, this laid the groundwork for push rims, enabling users to be more independently mobile. But this advancement didn’t come until 1881, or near the end of the 18th century.

One of the most historic developments in the 19th century came in 1916, when a motorised wheelchair was reportedly first invented and used in London.

In 1932, engineer Harry Jennings built, designed and tested what would later become the modern folding wheelchair. Its design is closely similar to what’s available on the market today. In fact, through a friendship with Herbert Everest, Jennings would establish and launch one of the most competitive wheelchair companies to exist in its time.

1953- The Beginning of Electric Wheelchairs

Even though the push rim, along with other advancements, enabled users to independently operate their wheelchairs, mobility would quickly become motorized. Depending on the user’s personal circumstances, manual wheelchair can be of limited use.

After initial experiments in 1916, it wasn’t until George Klein’s invention in 1953 that electric powered wheelchairs became a reality. Originally, Klein and his team invested in motorized wheelchairs to aid veterans returning injured from World War II.

As an early demo of the motorized wheelchair, Klein’s design featured heavy wheels with limited steer and turning. It was later mass-produced, demonstrating market demand for a more sophisticated, powered wheelchair option.

Key Dates in the History of Electric Wheelchairs

In recent years, the wheelchair market has only grown. From its original demand back in the late 1950s, a sense of popularity that was owed to Everest and Jennings, the wheelchair has become more relevant and significant today.

In fact, the wheelchair so critical to the continued wellbeing and health of society that the World Health Organization declared it a basic human right. That’s because wheelchairs enable users with a range of limited mobility and disabilities to regain some independence.

Throughout the most recent decade, the market has seen a demand for comfort, reliability, and innovation. New technologies have the power to change the ways we think about mobility. This might, for example, means tighter turning circles, or a nimbler design so that wheelchairs can fit into smaller, more compact spaces.

Over time battery sizes and weights have gradually improved. LITH-TECH, for example, use batteries that weight very little compared to lead acid batteries (which were more popular in the 1990s and early 2000s).

Looking back, the electric wheelchair has evolved through constant innovation.

LITH-TECH lives up to that history of innovation, where even our company name is short for lithium technology. That’s because our electric wheelchairs are operated through state-of-the-art, lightweight lithium batteries, or e technology that sets us apart from the market.

Our wheelchairs are fully foldable and feature lightweight frames, because they use the latest in material technologies. Our SMART Chair range, for example, features not only some of the most impressive, market leading components, but also boasts additional functionalities like multi-terrain handling.

About the author: toby st george

No other information about this author.

We use cookies on our website to give you the most relevant experience by remembering your preferences and repeat visits. By clicking “Accept All”, you consent to the use of ALL the cookies. However, you may visit "Cookie Settings" to provide a controlled consent.
Cookie SettingsAccept All
Manage consent

This website uses cookies to improve your experience while you navigate through the website. Out of these, the cookies that are categorized as necessary are stored on your browser as they are essential for the working of basic functionalities of the website. We also use third-party cookies that help us analyze and understand how you use this website. These cookies will be stored in your browser only with your consent. You also have the option to opt-out of these cookies. But opting out of some of these cookies may affect your browsing experience.
Necessary Always Enabled
Necessary cookies are absolutely essential for the website to function properly. These cookies ensure basic functionalities and security features of the website, anonymously.
Functional
Functional cookies help to perform certain functionalities like sharing the content of the website on social media platforms, collect feedbacks, and other third-party features.
Performance
Performance cookies are used to understand and analyze the key performance indexes of the website which helps in delivering a better user experience for the visitors.
Analytics
Analytical cookies are used to understand how visitors interact with the website. These cookies help provide information on metrics the number of visitors, bounce rate, traffic source, etc.
Advertisement
Advertisement cookies are used to provide visitors with relevant ads and marketing campaigns. These cookies track visitors across websites and collect information to provide customized ads.
Others
Other uncategorized cookies are those that are being analyzed and have not been classified into a category as yet.
SAVE & ACCEPT

LITH-TECH ARE THE UK'S NO 1 FOLDING ELECTRIC WHEELCHAIR BRAND .......Please watch all of our VIDEOS and read all our TESTIMONIALS...FREE NEXT DAY DELIVERY...........Once you have read this banner click on the far right hand side of it to close it down :) Dismiss